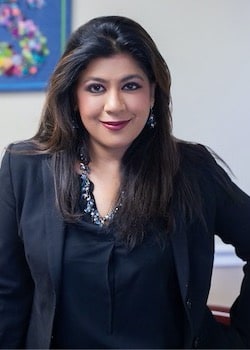 Attorney Sheila Charmoy is a Partner in the law office of Charmoy & Charmoy with offices in Fairfield and Stamford, Connecticut.

Sheila Sinha Charmoy's practice focuses on family law, including divorce, custody issues, divorce mediation, post judgment proceedings, and appellate proceedings. Her practice focuses on highly contested cases, whether that is financial or custody related. Sheila is an experienced family trial lawyer and regularly litigates high asset cases. She has experience and knowledge of the particular issues involved when one party in a divorce is a business owner or otherwise self-employed, including making sure business interests are properly valued for purposes of the divorce and that an accurate income is considered for purposes of alimony and support.

In addition, she frequently serves as a Court appointed Special Master in Milford and Bridgeport Superior Court. She also frequently lectures on divorce issues related to taxes, and has presented in Las Vegas for the American Institute of CPA's, as well as being a regular speaker at the North East IRS representation conference. She has also presented to the Asian American community about the specific issues related to domestic violence cases.

Sheila has been has been a member of the board for the South Asian Bar Association of Connecticut since 2012, and served as its President from 2015 to 2017. Sheila was a Commissioner for the Asian Pacific Islander Affairs Commission of Connecticut, where she also served as it's Secretary. She is also a James W. Cooper Fellow with the Connecticut Bar Foundation. She is a member of the Executive Board of SNEHA, an organization that assists South Asian women, particularly victims of domestic violence. Sheila currently sits on the Board of the Easton Learning Foundation.

Sheila graduated from the University of Bridgeport in 1995 and Quinnipiac University School of Law in 1999.

Practice Areas
Client Reviews
★★★★★
I used the professional legal services of Sheila Charmoy during my divorce proceedings. Sheila proved herself to be a strong advocate and excellent negotiator. She took the time to fully explain and research all my legal options and the end result was a fair and equitable solution. I would highly recommend Sheila to anyone seeking highly professional and dedicated legal service. J.M.
★★★★★
I hired Sheila Charmoy to sort out some post-judgment issues with my ex-husband. She is a conscientious, highly knowledgeable, experienced family attorney, who always responded to all my questions, concerns, emails and phone calls. She kept me updated on the status of my case, and was always well prepared, and performed extremely well in the courtroom. She works hard and has a high level of integrity that made me trust her completely. I recommend her without reservation. N.S.
View More
Submit a Law Firm Client Review